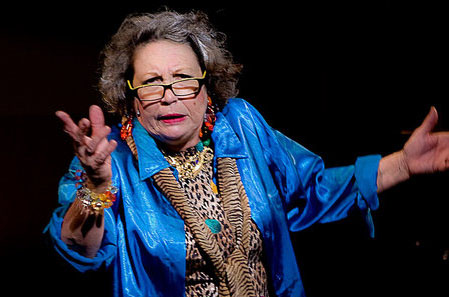 Named one of Dallas Five Best Actors by dallasculturemap.com, 3-13- 13

Dallas Morning News, for Collected Stories: “the City’s best actress of her generation…”

Dougherty’s Thelma staggers across an excruciating arc, exploring all the identifiable stages of grief as if they were stations on The Cross. Dougherty never plays for sympathy. Each stage of grief she passes through seems a believably surprise embodiment arising out of natural occurrence.      Criticalrantrave.com

I’ve seen a few Jeanettes over the years, and normally they slog through her one song and offer a mediocre one-liner from time to time. Under Dougherty’s control, Jeanette was sassy, brassy, and bubbling over with an exciting sense of “what’s this crazy old broad going to do next?”      DFWFrontRow

Not to say the acting isn’t spot-on, with Schwartz and Dougherty providing ample comic relief with their broad but believable characters. Dougherty shuffles around the stage…making comments that seem almost thrown away but still landing every juicy morsel…hers is a small gem of an almost cameo role, played for all it’s worth…     The Column

Over everyone, however, soars the magnificent performance of veteran area actress Pam Dougherty. As the second-act Big Edie, she’s almost always in bed, sitting up barely dressed under layers of quilts. From there she reigns, her singing voice blending with Sheehan’s as if they share DNA. Looking just like her documentary counterpart, Dougherty’s Edith is a charming, terrifying, terribly needy narcissist. With every blast of “Edieeeee!” the walls of her make-believe mansion seem to tremble.”      Dallas Observer

The Tale of the Allergist’s Wife

And some short clips: